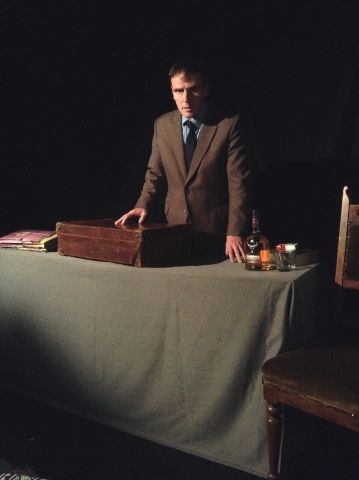 Willie MacRae was a prominent Glasgow lawyer, life–long SNP member and anti-nuclear campaigner. A complex man of integrity, he had been a captain in the Royal Indian Navy and supporter of Indian Independence. He was author of Israel's Maritime Law Code and emeritus Professor in the University of Haifa there. He ran a commercial law practice but still made time to take on Civil Rights’ cases.

On April 6 1985, ironically the anniversary of the Declaration of Arbroath, he set out with a packed weekend case for a few nights at his cottage in Kintail. MacRae was found dying in his car with a single gunshot wound to his head fired from his own handgun. The gun was found some distance from the car. Repeated demands for an inquiry into his death have been refused. MacRae was seen as a subversive with allegations of involvement in terrorism and there is evidence to suggest that he was under State surveillance on the day he died.

Andy Paterson’s play one man show takes place after MacRae’s death and this controversial story is narrated by Paterson as MacRae through speech, original songs and a film featuring Edinburgh punk band Oi Polloi playing their song Willie MacRae. The play’s title comes from the fact that to mark his death, a forest of 3000 trees was planted in Israel, where he was emeritus professor at the University of Haifa.

In the small makeshift venue that by its nature creates an intimate atmosphere, Paterson gives a direct and impassioned portrayal of a man who was unconventional in every aspect of his life. His delivery indicates the orator MacRae must have been. With a whisky glass being perpetually filled by this man who was many things, including being against colonialism; against the ruling class and not the English per se; a lonely and very male homosexual who found genuine brotherhood while in the navy. The pain of general lost love shows behind Paterson’s steely blue eyes in his interpretation of this self- proclaimed ‘cultural nationalist’.

The inclusion of songs, however relevant and well sung, to punctuate this serious narrative seemed strange and the screening of a film of Edinburgh radical punk band Oi Polloi playing their anthem to Willie MacRae, though interesting, sat at odds with the play’s seriousness and setting.

One of the first dramatisations of the story, this is a gripping and heartfelt exposé of a little known piece of Scottish history that still has questions to be answered.

The production of two plays showing on this year’s Fringe on this subject, the other being Grey Coast Productions of 3000 Trees by George Gunn, coincide with the launch of new requests for a public inquiry.

3000 Trees: The Death of Mr William MacRae by Andy Paterson was first performed at the Arches Studio Theatre, Glasgow in 2011.