The Liz and Dick Show Review 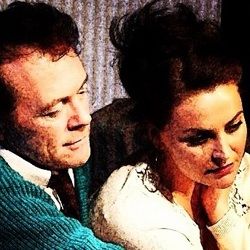 This is the easiest review I have had to make so far this Fringe because it's one of those glorious hidden gems that occasionally washes up on these frequently desolate shores. This is the third show I have seen in the last four weeks which attempts to shed light on that strangely compelling car crash of a marriage between Richard Burton and Elizabeth Taylor. I say car crash that is an understatement, two of the worlds largest ocean-going oil tankers in a head-on collision travelling at full speed would come closer to a reliable analogy but still fall well short of the truth.

In this production Ken McConnell and Lydia Poole come the closest I have ever seen to capturing the essence of these two behemoths; Burton and Taylor. It is an interesting dilemma for anyone seeking to portray a legend with whom virtually everyone is familiar, do you copy or interpret or only try to represent certain aspects of the person you are playing? Dominic West's recent TV appearance as Burton was an insipid character when contrasted with the full bloodied rip roarer of a man displayed by Ken McConnell, but cleverly the subtleties of this trapped soul are not lost beneath the alcoholic harangue that was to some extent a permanent fixture of Burton's later years, well, all years actually.

Lydia Poole has also managed to grasp that streak of dirty back street fighter that infested Taylor's character and gave her performances that core of danger that was always compelling. Taylor was an amazing mix of whore and virgin, sweet and sour, you didn't know what you were going to get, but when it arrived, boy you knew it. Lydia Poole portrays this and has nailed down Taylor's love and loathing of Burton and walks both these tight rope with finesse.

The play for the most part centres around the time of filming 'Who's Afraid of Virginia Woolf?' In Burton's diaries which were published in 2012 we learn that Richard had to cajole Taylor into taking the part of Martha in the film, because he knew that whoever played that part was virtually guaranteed an Oscar.

Taylor wasn't keen but eventually gave in. Burton played to Taylor's strengths, supporting her, helping, infuriating her where it aided her performance. Sure enough Taylor won her second Oscar.

There was jealousy, pride, egotism, love, spite, sex all bound up in their lives during this time. Dhani Ali the writer has crammed the whole lot into an intense 60 minutes and Richard Oliver has successfully directed the actors allowing the portrayal of this seething relationship to emerge white hot before the audience.

A wonderful piece of theatre, with great performances.