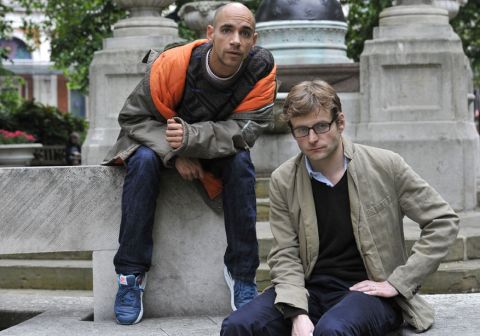 Alexander Master’s biography of Stuart Shorter has achieved something of a following. Unlike ‘Six of One’, composed of fans of the 1960’s series ‘The Prisoner’, nowhere as salubrious as Portmerion for them to explore.

The Oxford in which Masters first met Stuart was less the city of dreaming spires than one of spaced-out dossers. The two met as protesters, their cause two workers at a drop-in centre for the homeless, unjustly convicted of allowing drugs to be sold on the centre’s premises.

Stuart’s vocal involvement in the campaign became the catalyst for the two men’s friendship and ultimately for the book Masters wrote.

It was Stuart, however, who insisted that Masters tell his story, a demand for which we ought to be grateful.

Filmed by the BBC some time ago, this stage version once again brings it rightly to our attention.

Unavoidably, any adaptation raises questions as much about what is left out as about what remains. Here, Masters seems far more tolerant of Stuart’s shortcomings than in the book, and as in a couple of other instances, one wonders whether the sacrifice was really necessary.

Nonetheless, the cast rise admirably to the challenges they are presented with, compounded by the injury of one cast member (Will Adams dale as Alexander Masters) early in the run.

They work well together, and Fraser Ayres inhabits, rather than portrays, Stuart with genuine integrity.

It is an unsettling reality that numbers of children present themselves to be taken into a care system that we are only slowly beginning to realise has far too often failed to protect them from more of the abuse they have sought to escape, and abandoned them at the point when they still badly need support.

It’s always a serious challenge to present a known work in another medium, and any comparison becomes unavoidably invidious. This is a production that meets these challenges with great dignity and honesty.