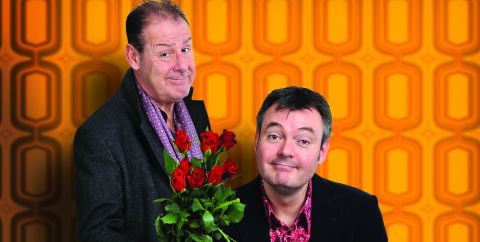 Laughter is the order of the day in this hilarious piece that was specially commissioned for this year’s Edinburgh Fringe by the Gilded Balloon.

Two lonely middle aged men find themselves in the same cheap digs. For different reasons, their lives have changed and they are having to start all over again.

The candlewick bedspreads on the single beds of Mrs Docherty’s seedy hostelry are a hint at how long it is since the beds have been changed. The windows are stuck, and even when they open the smell outside is worse than inside.

Through the paper thin walls, Ross (Andy Gray) can hear the warm sounds of Shirley Bassey wafting through. The comforting nostalgia comes from next door’s record player that belongs to Graham (Grant Stott). It is their common love of Tiger Bay’s famous chanteuse, Shirley Bassey, (aka Birly Chassis) that seals the bond of friendship between this modern day Odd Couple. Ross is a bottle swigging divorcée; Graham is a virginal, gerbil keeping naïf.

The men form an alliance that gives them the courage to step in to what turns out to be the scary and wacky world of the on-line dating site called Old Dogs. Here they encounter a series of caricatured but highly comic female characters. These creatures are created primarily by Andy Gray through his very own comic aplomb and the donning of a variety of headgear, sometimes at break neck speed.

On the small set, the fargical piece is resourcefully directed by Sam Kane. A car journey of side splitting comic ingenuity within this space is testament to that. The two actors have a clear rapport, doubtless due to their experience working together at the Edinburgh’s King’s theatre annual pantomime in the roles of dame and villain. While Gray is a stage veteran beyond Pantoland, this is a first for Stott but the pair is such a great double act that it may not be his last.

The style of the show is like a cross between an adult panto and an old Scottish variety show where the humour is full of innuendo, puns and local jokes with some back chat with audience thrown in.

The script is teeming with jokes in this bullet-fast comedy from the pen of Phillip Meeks who has put his ear to the ground to include the odd esoteric Edinburgh reference. Like all good writing in the genre, the Janus face of tragedy and comedy is present. The men’s tragedies create a poignant poignant lull before the pleasing dénouement.