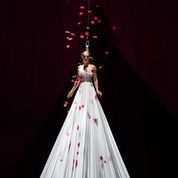 Director Firenza Guidi describes BIANCO as “A village, a community, a travelling world … the story of a great journey inside and outside of ourselves. The story of a battle between beauty and brutality, the fragility of lost selves, of lost wishes and desires…” Whatever the story or the inspiration, the result is astonishing.

Giant climbing shadows entice behind the gauze that shields the apparatus that will stand as the vehicle for the artistes to astound over this two hour show. A penny farthing bike and a mono cycle wend their way through the assembling crowds whose heads are already pivoting. Leather kilted ushers with flowers in their hats prepare for the promenade.

A giant snoring sound, like Hayao Miyazaki’s animated wood spirit character Totoro, signals BIANCO’s awakening. That sound and the trip hop music along with other eclectic sounds come from the fantastic Fireproof Giant, the four piece band that plays the atmospheric accompaniment with a variety of instruments to embrace the range of styles including voice over to the show.

The visually stunning and seamless experience of the astonishing feats done on swinging trapeze, aerial straps and rope, cloudswing, dance trapeze, trampoline, hula hoops, juggling, hand-balance and acrobatics as well as a human gyroscope are exciting and utterly alive. With exquisite flying and walking on impossible edges as easily as mere mortals walk on a street, troupe with their casual just-off-set flirting are flighty, feral and cool as...!

Performers seem to magic themselves on platforms before your eyes giving the audience a sense throughout of looking and being present yet saying in amazement, “How did they get there?”

The monochrome costume theme lacks some of the vitality and the dangerous glamour of the roving gypsy style and of their 2010 production tabú but the sense of the subdued spectacle remains in this physical symphony of discordant interdependence. And it is the casual relaxed joy of the troupe that impresses as much.

High heeled balancing s from Anne – fay Johnson and the equally amazing wire act from Ariele Ebacher are reminiscent of what used to be said about Ginger Rogers – doing what Astaire did only backwards and in high heels. A clear handicap put to brave advantage.

The same applies to Freya Watson who flies in her cloudswing a ball gown no less. The troupe performs their own kind of clowning without a red nose in sight, interacting charmingly with a delighted audience at the water free pool scene.

Under Firenza Guidi’s brilliant direction, and with a giant moveable metal set, we experience the capacity and vulnerability of the human body and witness the importance of human interdependence through the colossal physical skill of gasp inducing muscular feats from this ensemble

The finale is like a live snow shaker containing a lone empty swing that seems to whisper “Till the next time.” Joyous and astounding!