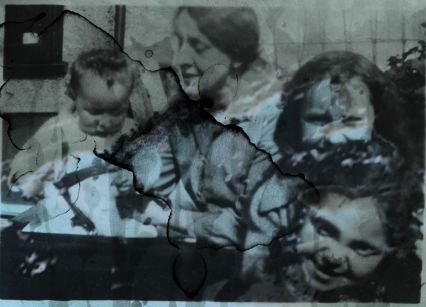 It feels like we are climbing the stairs of an Edinburgh tenement, winding up until we reach the door to flat 9. It’s closed, but just as we wonder whether they have forgotten that we were coming, a woman arrives, shopping bag in hand, and welcomes us in. It’s a cosy flat, filled with a lifetime’s hand-me-down furniture, ornaments and photographs.

There’s a party of sorts and two other friends are already there. “You did bring a bottle didn’t you?” Anne asks as she pours herself a generous glass of wine. She is a little tipsy, a bit flirty and, as she makes her introductions, seemingly conflicted over failed relationships, dreams and a teaching job that has devoured her.

As the savoury snacks are handed round so are pencils and paper: a kind of party game where we write a prompted memory to be placed in a glass jar. There are a lots of these dotted around, stuffed full of reminiscences and photographs.

As the characters share their thoughts with us and each other we can piece together a little about them. Sylvia, who met us outside, is a more maternal figure, a little reserved and both judged and judgemental.

The action flows and ebbs around the characters as we follow them into bedrooms to learn a little more. Bea, with her pink dress and plaited hair, seems caught on the cusp of being an intelligent woman of the world – perhaps held back by a difficult childhood.

And it is “perhaps” because the non-linear script, mixed with movement and gesture, demands that the audience put their own interpretation on the relationships, informed and moulded by their own memories. While the characters seem to conform to a certain “type”, they appear to struggle to define their place in the world and their relationships to each other, even when the memory jars are finally opened.

This is an immersive work with a unique style (although there is a little similarity to Breathe Theatre’s fabulous productions of “Just To(o) Long” and “Crossed Wires”). Theatre Corsair has set out to make a piece of “total” theatre and they have succeeded in just about every respect - it involves a range of techniques, the text offers several interpretations and the set, props and lighting form part of the action. The area that could be developed further is the involvement of the audience to make it truly satisfying.

Impressive, haunting, striking – all synonyms for one word: memorable.