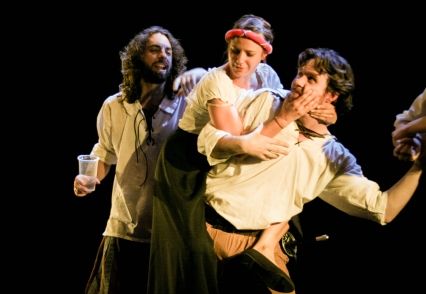 Thesp’s are known to like a drink, be it a little Dutch courage or the full Oliver Reed. Few, however, go on stage deliberately drunk, but in this Midsummer Night’s Dream we are told that one of the cast has been tasked with drinking heavily since six o’clock – “five o’clock!” comes a merry rejoinder from the wings.

In other respects, it’s a cut-down version of the Bard’s most performed work, centring on the main sentimental plot of four young Athenian lovers who are manipulated by forest-dwelling fairies. In short, Demetrius has to marry Hermia, Hermia wants to marry Lysander, Puck puts a potion into Lysander's eyes by mistake, Demetrius then returns the love of Helena.

Not that the plot matters, as all the attention quickly goes on the exploits of our inebriated actor – in this instance John Sebastian as Demetrius.  It’s a comedy of errors as he stumbles over lines and scenery, hitting and missing marks and cues and making Shakespearian asides about his fellow cast members and director.

In less skilful hands this could be cringe-worthy but it manages to remain endearing as he seems to actually care about both his craft and his companions as he struts and frets his hour in a desperate bid to deliver.

Just as the love-in-idleness love drug is a plot device to introduce comical chaos, so are the further cocktails administered by an able compere playing a sort of gong-show host. Encouraged by the audience, our bewildered and beleaguered actor is thus kept in his cups to ensure no chance of a coherent performance.

Miraculously (and by now he is miraculous), he does latterly hit his stride and reels off a series of lines. Unfortunately, they belong to everyone else, but this doesn’t prevent him from smashing them back and forward in gleeful abandon. The remainder of the cast are, to some extent, relegated to supporting roles (literally at points), but are generous and adept.

OK, it’s puerile and it’s not big and it’s not clever – but it is funny.   Shakespeare has been endlessly adapted, from West Side Story to Kurosawa’s “Ran” (based on King Lear), but his mainstream work is in danger of being seen as irrelevant or elitist. Seeing a Shakespeare play in its day would have been more akin to a modern rock concert – a raucous, lively mix of sophistication and vulgarity – and, while it may be seen as heresy by some, this production brings back that sense of shared messiness that is often part of his work.

It verges towards being uncomfortable only momentarily and the supportive audience is not bullying, even in its enthusiastic exhortations to “down it!” as more drink is proffered.  The downside is that the rhythm of the lines is mangled beyond repair: way beyond what might have been acceptable even on an energetic night in The Globe.

As the audience members are told that all they have witnessed might have been a bad case of delirium tremens, it’s obvious that they have loved it in the way that they might have 400 years ago, largely getting to their feet in ovation – apart from Demetrius, who couldn’t have stood up even if pursued by a bear.

A sobering thought is that years of heavy drinking may have taken its toll on Shakespeare’s health. Or, if you think that the works were actually penned by Edward de Vere, that he might have been an alcoholic.  But all’s well that ends well – at least one researcher believes that only an alcoholic could have produced such sustained exploration of intense emotional states and giddy word play. Perhaps shit-faced Shakespeare is closer to the truth than might have first appeared.

See it before the Scottish Government bans it as part of its agenda of cultural change in attitudes toward alcohol. Please remember to use iambic pentameter responsibly.