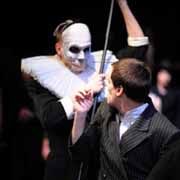 Something special happens when visual artists take to the stage. With their insatiable need to find a new means of expression, they use the theatrical space as a natural extension of their studios; the human body becomes another component to the palette with the addition of a fourth dimension of passing time.

This was the way Tadeusz Kantor, one of the most important theatre practitioner/artists of the 20th century, manifested his unique style. Kantor was introduced to Edinburgh by Richard Demarco, whose influence is evident at Summerhall.

So it comes as no surprise that co-directors Andrezj and Teresa Welminski, former members of Kantor’s Cricot 2, working with a versatile ensemble of recent graduates from Rose Bruford College should turn the surreal pages of Polish artist/writer Bruno Schulz’s densely impressionistic short stories into an exquisitely beautiful moving picture on the Summerhall stage.

In a story that principally is about the relationship of a father and son, Schulz adopts the character of the protagonist, Josef, who steps out of the pages of a great book remembered from childhood. In search of his deceased father, in this distinctive world where, under the “mechanics of time”, the past enters the present bringing the dead back to life.

The actors slip effortlessly between human and animal identities with logic-defying transformations.  A door, manipulated by a human wall with electric light bulbs in tow, assumes the attitude of a star performer before a cacophony of exotic birds which cluck, strut  and screech their way across the stage. The train that takes Josef to the sanatorium is a conglomeration of black clad, pale faced, hissing and sighing actors turned steam engine.

Sinister maids with shoe fetishes, a battle-axe nurse and comic book doctor tease the bewildered Josef in Kafka-esque style, as frozen mannequins - their only movement limited to that of an automata - transform effortlessly into sewing machines and any other required inanimate prop.

With imagination and skill, the actors succeed in creating a richly textural soundscape using their voices, percussion and musical instruments throughout. The atmosphere and pace alter towards the ending in unsettling foreboding that alludes to the terrible mass killing in the Drohobycz ghetto, where Schulz lived, and to his own shocking murder at the hands of a Nazi.

Whether or not you are familiar with East European absurdist theatre and literature, this show offers a deliriously hypnotic experience in an anarchic dream world.