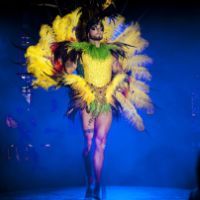 It’s a balmy summer evening and George Street is buzzing with Festival crowds out in their finery and lapping up the atmosphere and on top of that the capital’s elegant New Town street is host to the utterly magical Famous Spiegeltent, one of its favourite venues since it first arrived in 1985.

The Famous Spiegeltent has been host to countless shows over the years, but I always think it is essentially a night time venue as it lends itself so well to magic and spectacle with its booths and mirrors and circus tent ceiling.

In preparation for this year’s performance from award-winning, world-renowned cabaret show La Clique, Spiegeltent is also dressed in its starry skied finery and the atmosphere is set with some great build-up music to set the tone for an exciting night.

To mark the Jubilee year, we are privileged and honoured to be in the company of HR Herself (Gerry Connolly) as the audience for La Clique Royale, a variety performance like no other.  The show was M.C.’d by top magician Paul Zenon who entertained with a plethora of gasp inducing tricks, quick fire, self- deprecating patter and costume changes.

To a stupendous fanfare followed by the national anthem (to which everyone rightly stood), ‘The Queen’ enters and gives a fabulously irreverent speech that’s peppered with suitable local jokes in an alarmingly convincing voice!

The outrageous and gorgeous Mark Winmill does a strutting peacock fandance and striptease that is a quivering sensation. Mikelangelo, the Balkan Elvis and sartorial king, sings his wild lyrics in his big mesmerising voice under the guise of innocent Eurovision songs and plays accordion. He is cool as …as he moves among the audience! A visual and aural treat.

Mirko from Berlin is a burlesque acrobat who comes on with a Keatonesque look, stripping and dressing mid-air as he balances on a set of cases that gets higher and higher. Bawdy and cheeky trapeze stars the Wau Wau Sisters wow the place with their tricks and Lilikoi Kaos with her hula hoop act done to Minnie the Moocher is audacious and jaw droppingly skilled. Agent Lynch has adopted the burlesque character of a Swiss Maid and all I will say is that the songs Edelweiss and The Lonely Goatherd will never be the same again. Muscular aerialist Didj Wentworth was impressive as he made elegant shapes with his body on a trapeze of tapes.

This sexy, sublime and utterly transporting spectacle that was rounded off with ‘The Queen’ singing One’s Way  before the cast whoops it up on the small circular stage that held so much talent to the joy of the crowd.  This is burlesque with a capital B.  There was no jewellery rattling; just happy and glorious applause. Long may La Clique reign!