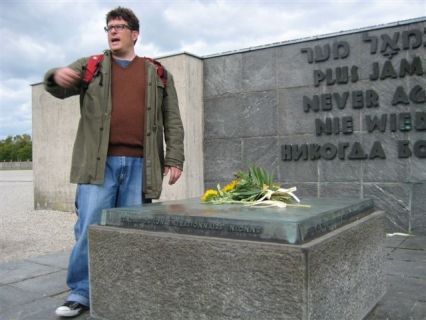 This is the story of Robert Johnson’s experience of working as a guide at Dachau, the Nazi concentration camp – a job that nobody aspires to.

It seems surprising that Johnston is American, as he admits “Americans don’t emigrate”, but it’s a winding road that has taken him to Dachau. Originally an exchange student he started by qualifying as a more general guide, doing the usual scenic beer and castles type tours. Working at Dachau was not just something he didn’t seek, but actively resisted, not wanting to “sour” himself on Germans. The camp comes closer on a long, hot walk there with his brother, Tommy – a violent and racist skinhead.

Johnson’s telling of the story is given with an uncompromising restless pace, peppered with personal details and historical facts. Accuracy and truth are clearly big things with him and he seems to view the “Never Again” message inscribed on the camp’s memorial as too complacent.  This is in some ways a never ending story. Concentration camps may have started with the prototype Dachau but they didn’t end there and the lessons in being not human echo down the years.

Even for those with knowledge of the Holocaust there are new details and perspectives to be found. What Johnson does is not a museum tour – he manages to place it in context and bring it to life. Some of the detail is so personal as to lessen its resonance but it is his story and therefore unfair to criticise. This is a spoken word piece and to his credit the authenticity of the telling is more powerful than some drama that covers similar issues.  That said, it would tempting to see if a more theatrical approach could wring even more from it.

As he says, he does it “because somebody has to” - all that he asks is that you listen, and then you are free to go.