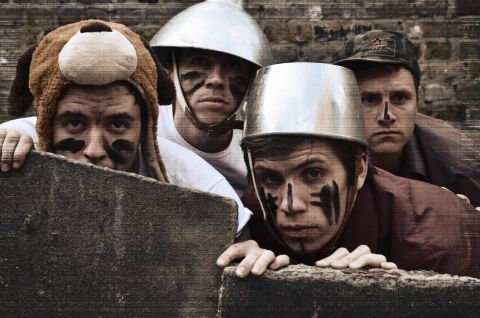 Emerging from a barrage of bombs and bangs, a group of (absurdly large) children survey the ruins of their devastated French village, scouting out their territory in a wordless exchange of clicks, bangs and whistles. With the focus that only children at play can harness, they defuse a dangerously “unexploded” pot to wear as a helmet, assess their fitness for action and share out a single carrot field ration.

When a real soldier stumbles across them (an American to boot), it’s difficult to know who is the more surprised and each party feels the need to broker a truce. And so war and war games combine.

Flash forward to the field station of Nataero, a sort of archaeological outfit (named after the Roman God of Lost Things). They have uncovered artefacts belonging to the self-same soldier and wish to share their discovery with his grandson, Leon. While they may argue childishly about their roles in discovery of the items, they treat them with reverence – particularly an undeveloped role of film which opens a window back in time. They seek answers to puzzles – what was the young Corporal Martin McNamara doing there, 86 miles away from his decimated or destroyed unit, and if he stayed, why?

In a series of snapshots we see the interactions of McNamara and the children as he engages in their world of sometimes dark and disturbing games and supports their attempts to become their own little Band of Brothers who will need to face an approaching army with little more than wooden rifles, a tatty flag and the odd root vegetable.

The company describes its work as “very physical, visually cinematic and funny, but with a touching humanity at its core,” and on all these fronts it delivers in the truly playful, intimate and open style espoused by Lecoq.

The work is intended as a tribute to the way in which children can find light in the darkest places. The imagery is therefore perhaps a little time misted (rather like Bert Hardy’s street urchins in the Glasgow Gorbals) in comparison to Cai Yang’s disquieting contemporary photos of children playing war games in Benghazi.

There are some great moments – in particular when the children enact a flying scene with a folding table biplane. The difficulty is that, as a whole, it could benefit from an edit to ensure that the (often wordless) narrative remains clear and that the content is universally strong.

That said, there are a couple of brave, long, silent pauses that should be retained. The transformation of elements of scenery between the two settings is good, if occasionally underwhelming, but the sound design with its effects and unconventional arcing, looping, live soundtrack is a triumph.

This story of lost film could be developed further but, while the overall effect is a little patchy, it’s innovative, engaging and well worth seeing.