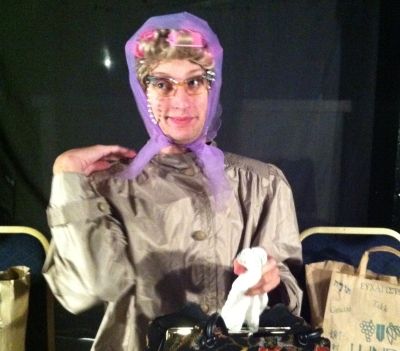 It is said to be a truism that there is a "crazy" (drunk, socially clueless, terminally rude, etc.) person on every bus. This seems borne out in this award winning one-man play by Kevin Kling, set on the route 21A through Minneapolis.

Not only is there one of the above but a whole deck of them, dealt out in a series of overlapping, interconnected monologues that gives several perspectives of the same six minutes. The action takes place around mysterious gunshots that, like a staring pistol, fire off each change of character.

First up is Gladys who, with a marvellous lack of internal editing, feels the need to chat to everyone about her war-time romance, now faded to the degree that husband Big Bob has “his” TV shows and she hers (Love Boat) and the cat, Little Bob gets more affection.

The neatly linked sections show the interrelation of the characters, sometimes ingeniously showing the response before the dialogue that prompted it. As Gladys reacts to the other passengers on the bus they come to life one by one. The quick changes are covered by a recorded soundtrack of the bus driver’s conversation as he goes to a coffee stop seeking a fix of synthetic snacks.

Back on his bus, evangelist Chairman Francis is taking egalitarianism to new levels in touting his faith in democracy while mistakenly identified “Dave” is fending off the quixotic, drunken, urban crusader “Captain Twelve-Pack”. Add into the mix an invisible friend and stir well with a man with a gun, whose motives are not as they might first appear.

The script is a mix of gentle, wry and absurd humour with some delightful use of language. Some characters are stronger than others and not every line hits its mark (perhaps travelling less well), but the fast pace and clever structure keeps things interesting. The staging utilises a simple layout of chairs defining the bus and as the motley passengers arrive they leave a few personal items, effectively marking their presence and filling up the seats.

Neal Beckman shines in the omnibus of roles, giving a slick performance, vivid characterisation and exhibiting a great sense of comic timing. There are a few points where the intensity could be turned down just a little but it remains an impressive achievement.

All aboard: no ticket required – just don’t sit beside the cat lady or the drunk or the missionary or the gunman . . . .