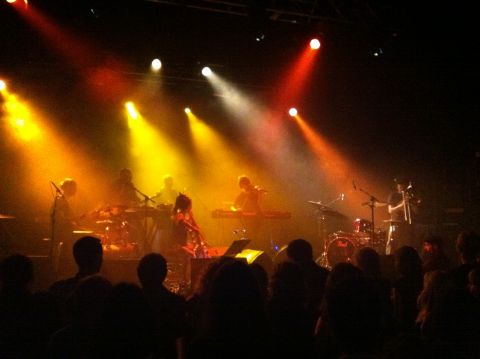 I had no idea what to expect of this evening concert, but it was recommended by a friend and that was enough to swing me in the direction of the Queen's Hall for my first Edinburgh Jazz Festival gig.

The concert certainly breaks the rather trad image that the jazz festival, rightly or wrongly, has had in the past, with both bands as much at home with the tools of the electronic era as traditional instruments. It was also reflected in the youthfulness of the audience.

The gig was in two halves, both good in their own way and it turned out complementary.

Hidden Orchestra, are an Edinburgh ambient electronica outfit (definitely a very loose definition of "jazz" is being used here) who have made good abroad and were returning to general local appreciation.

There is a lot of them. Nine members, including the two drummers with full kits, fiddle/keys, a french horn, trumpet, harpist (yes!), sax/kaval player, cello and a heavy electric bass that reverberated from head to toe and set the pews in the old church rattling.

A woolly headed Joe Acehson led with deep, rumbling bass – head down, twisting buttons – as the two drummers (sounding as one) supplied a rolling, syncopated rhythm. Poppy Ackroyd swapped between synth and electric fiddle adding layers to an emerging soundscape, while at the back of stage the brass, cello, memorable flute, and (often barely audible) harp, provide dabs of colour and melodic overtones above this velvety groove, creating cinematic like arrangements (at one point, they build up a very James Bondish groove). Curious samples are interspersed throughout, and I found myself swaying easily along as the soundscapes swelled and fell.

It was a good start to the evening, although my companion who has followed them over the years insisted that while he loves Hidden Orchestra's sound, “they haven't reached their potential.” He wanted more. There's definitely a sense that they are a young band still experimenting with its sound. Not the kind of the band that likes to let rip, but rather one that would like to whisk you away for a few minutes on its magic carpet and then gently place you back on the ground.

Red Snapper is a different thing altogether. Sometimes filed under Electronica – Red Snapper's jazz fusion of hip-hop and drum 'n' bass seems much more of an old school proposition, with much less digital paraphernalia on stage than Hidden Orchestra.

Red Snapper have been around the block and know how to get a crowd going. From the start to finish, they totally let rip. Ali Friend leads with some runs up and down the double bass, getting some meaty electrified sounds, while retaining much of the acoustic character of the instrument. Richard Thair, forearm muscles coiling, provides driving drums, while David Ayers lets loose on guitar. Tom Challenger jumps straight off the high board into the deep end, with squawking, screeching, maniacal sax, that after some initial dissonance was sounding raucous in a great way.

This was a raw, ballsy performance and when Friend told the audience it was great to be back, you didn't doubt him. The band was having a riot. It was difficult to stand still and by the end of the night, the whole room was swaying, the front rows thrashing around. We emerged into the balmy Edinburgh night, pouring with sweat and sticky with beer very satisfied.