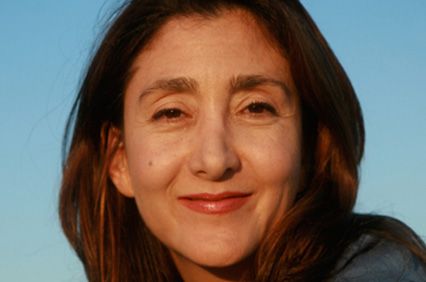 There was a packed house for the Baillie Gifford event with hostage survivor Ingrid Betancourt and Kirsty Wark.  Ingrid Betancourt was introduced as, "the mother of Melanie and Lorenzo" and the Colombian Green Party leader who was captured by FARC when she was campaigning for the presidency of Colombia in 2002.

She was held for some six and a half years in the jungles of Colombia before being released at the beginning of July 2008.    Wark said that she had been moved constantly by her captors, was mentally abused and beaten and kept with a chain round her neck on occasions.  Eventually she was liberated by the Colombian army together with fourteen other hostages who were with her.

Betancourt was here to introduce her latest book, "Even Silence Has an End" which describes her jungle ordeal, her relationships with the other prisoners and her captors as well as the struggle of living in the jungle with many insects such as red ants, tarantulas, anacondas, and other creatures which make life in the jungle so unpleasant.

Kirsty Wark asked initially, "How have things changed for you since your imprisonment?"

The reply showed that even three years after her release Betancourt still wakes in the morning and is very fearful until she recognises where she is.

In the jungle she never knew what would happen to her, whether they would be moved, explaining that really it was the unknown that frightened her.

She constantly worried lest her mother or her children should die before she was released. She said that she spent many hours of the day thinking about her family. She was not to know that her father had died a month after her kidnapping.

Kirsty Wark said that she felt that there was a strong presence of her mother through her book and obviously she has been a great strength and influence on her, which Ingrid agreed.

Asked how she managed to maintain some level of control over her situation, Betancourt said this was extremely difficult as the guards were being changed constantly so that they did not form any attachment to the hostages. When the 'Stockholm syndrome' was mentioned (where the captors develop sympathy for the cause of the captors) she said that there was never any chance of this becoming a possibility as the guards were kept detached from the hostages and little discourse took place.

In questions from the audience she was asked if there was anything she missed from her time in the jungle, to which she replied - "I miss the companions I shared the experience with and I am always glad to have messages from them or to speak with them."

Wark asked if she had strong religious faith, but Betancourt said that initially she did not have a strong belief, however, the need for something to hold on to became more important the longer she remained a captive.

Betancourt said she told her mother that she now intended to study theology, to which her mother replied, "Oh, so you are going to become a nun!"

This was a fascinating hour in the presence of someone who had endured six and a half years of enormous strain and privation.  Clearly there are some who were with her during this time with whom she has had differences of opinion, but Ingrid Betancourt came across as a capable and principled woman. There is little doubt that her book will be a fascinating read.