1913 or Nude Descending a Staircase 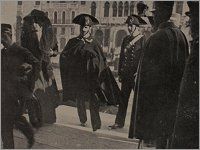 Maria Tarnowska's case attracted
considerable public attention even among the crowded events of 1913. She has
been credited as being the inspiration for Marcel Duchamps' "Nude Descending a
Staircase," first exhibited in the preceding year, hence the title.
The events surrounding it would undoubtedly have provided Dostoevsky with further
material, had he survived so long.

This version, however, takes a more
traditional path, which is perhaps its greatest mistake. The Countess Tarnowska
certainly seems a character it would have been necessary to invent had she not
existed; married young to a lecherous drunk with artistic pretensions, she took
drugs, neglected her children and embarked on a series of affairs leading to
several deaths including her own. Mad, bad and dangerous to know doesn't seem a
completely unfair judgement of her.

In an attempt to be fair, however, the
world she inhabited has to be taken into consideration, and here this
production fails to fully deliver. it's not so much the stick-on moustaches the
ladies wear when playing the men in Maria's life, as the awkward staginess
which creeps in all too frequently. Admittedly the small space of Sweet City 1
gives little room for manoeuvring, but this reviewer wondered whether anyone in
the company had been to an Edinburgh Fringe show in the past few years? It's of
course unfair to expect every show to achieve that standards of the Traverse or
other major venues, but one hopes their positive influence in terms of making
different theatrical styles accessible to wider audiences would over time
produce its own effect.

The sheer inventiveness of the first decade of the
twentieth century slips by almost unnoticed here, apart from the presentation
of a few notable paintings germane to the subject matter. These years, however,
are the decade of Freud, Proust, the young James Joyce and John Maynard
Keynes, in short of the birth of modernism,
but there's no suggestion of this as the time of Maria Tarnowska. Biography is more than facts and illustration;
it's also a sense of time and place, which this production never quite
captures.