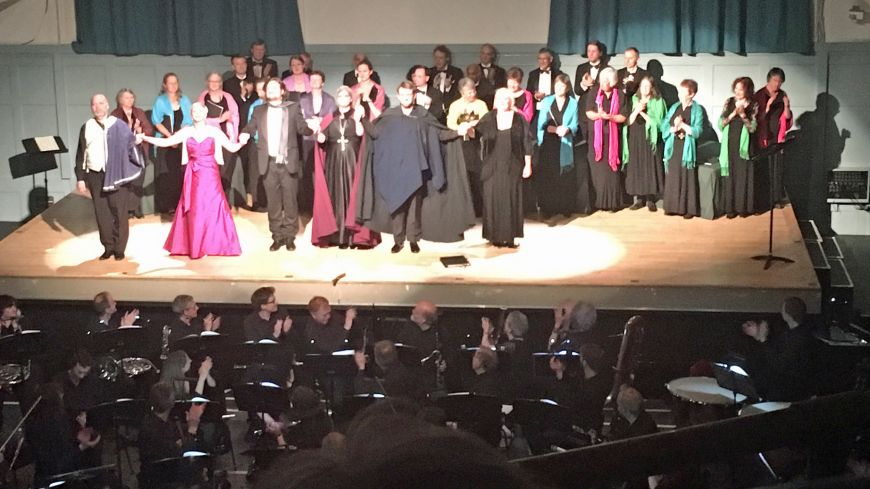 This, the third of Hans Gál's four opera was given its first performance in Breslau in 1926; several performances followed. Gál was enjoying a successful music career until 1933 when the Nazi regime banned all his work because of his Jewish descent. He eventually found his way to Edinburgh and was a senior and much respected member of its musical world until his death in 1987. Today his family work hard with the Hans Gál Society to promote his music. Producing this opera has been a very considerable undertaking.

This might have been its first performance anywhere for 87 years had it not been pipped to the post - just five weeks ago in Osnabrück. There it received first class reviews. The pressure has been on to do just as well, if not better. And in my view they have succeeded.

Each of the singers was good, and filled so appropriately the role they played. Well done Janet de Vigne who had the largest part as Lianora, the Crown Princess, who was tasked with finding a King for the twelfth century kingdom. She needed to satisfy Marcin Gesla, the Imperial Administrator. Initially we saw the Ladies in Waiting grumbling that they had been told to wait outside the royal chamber, and wanting to know why from Emma Morwood, the Princess's companion and confidante. Mark Saberton, as Tancred a knight and Lianora's cousin, might have been a suitable king. But Luke Sinclair's delightful tenor voice as both Cuillo, the boatman and the Nameless Singer contrasted well with the deeper voices of his male colleagues. The singer most talked about with delight as I was leaving at the end was Judy Brown, the Stony Abbess. It was she who enjoined Lianora into another world with disastrous consequences. The chosen king, be it the boatman or Nameless Singer, died by his own dagger.

Gál's music follows the action of the story and whilst the Orchestra of the Canongait were accompanying the singers as the opera began, they had us to themselves in the lovely lyrical opening to the second scene. Where regal fanfares were need, we heard them. Gál wanted there to be predominance of the vocal parts over the orchestra to be maintained throughout. This was the case sitting in the gallery, although a friend sitting close to the surprisingly large Orchestra told me that it wasn't the case for her.

I had the privilege of seeing some of the rehearsals at St Vincent's. The most memorable recollection was on day one. Robert Dick needed all his experience and authority to bring together the hitherto unknown; he most certainly succeeded - helped no doubt by the determination of repetitor, Madeleine Sjõstrand.

The performance was an experience not to be missed.