Scotland's Largest Puppet, STORM, Comes to Fringe by the Sea this August 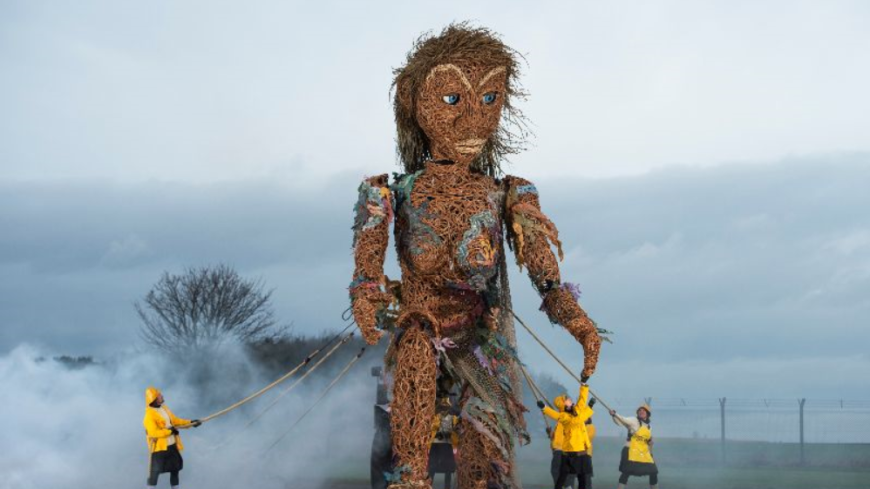 STORM, a ten metre tall mythical goddess of the sea, returns to celebrate our coasts and water at North Berwick's Fringe By The Sea on 15 August 2021.

Created by Edinburgh-based visual theatre company, Vision Mechanics, and first unveiled as part of Celtic Connections 2020, Storm will once again rise from the oceans to walk on land. Part of the Year of Coasts and Waters, Storm is folklore made real, living in the waters around Scotland and coming to land to tell the story of oceans in crisis.

Made from entirely recycled and natural resources Storm has eyes the colour of oyster shells, hair of thick strands of kelp and a voice of the chorus of the waves. She is accompanied wherever she travels by a beautiful soundscape created by the pioneering Scottish folk singer Mairi Campbell.

Aided by eight puppeteers, Storm – Scotland’s largest puppet – will gaze down at the beauty of the North Berwick coastline, urging care for the environment every step of the way in this free, outdoor theatrical event.

Vision Mechanics Artistic Director, Symon Macintyre said: “After meeting thousands of friends at her debut in Glasgow at the start of 2020, Storm has been lying in wait to return to Scottish shores and continue to share her message of care for our environment, our oceans and our coastlines. Storm brings communities together, something we have all been missing, and we’re delighted to be able to continue her journey on the beautiful beaches of North Berwick with Fringe By The Sea.”

Vision Mechanics have previously toured the giant puppet Big Man Walking across Scotland, transformed Drummohr House into the world of Oz and installed Giants in the Forest across the UK. Their work invites people to celebrate and participate in creating memorable and interactive productions on huge scales.

Storm is their most ambitious, challenging, and politically resonant project yet. She will rise again in towns and villages around Scotland in Autumn 2021. Plans for her tour will be announced in summer.

Fringe By The Sea will run from 6-15 August with a line up of over 150 events which will see live audiences being entertained in Covid-secure environments. Notable acts include Basement Jaxx, Huey Morgan, Peat & Diesel, Irvine Welsh, Janey Godley and Gail Porter.

More information about the best way to see STORM will be made available at www.fringebythesea.com and on social media channels nearer the time. Tickets for events can also be booked at this website.