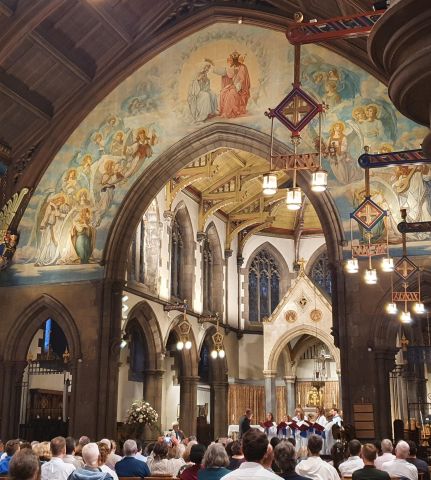 A recital that was more than just a concert – a real triumph for the Sacred Arts Festival, this performance saw many different threads so successfully interwoven.

The music of Sir James MacMillan is known the world over, and it was a joy to hear a number of these very accessible works performed by the gifted Schola Cantorum choir. The additional aspect to this performance however, which really set it apart, saw the music being interspersed by times of conversation – with Sir James being interviewed by Dr Michael Ferguson.

In the first half of the recital, we heard a number of items from MacMillan’s ‘Strathclyde Motets’. It was wonderful to hear the organ played so movingly at those moments when the music necessitated accompaniment. While the more modern sound of the saxophone complement to ‘In Splendoribus Sanctorum’ (an experiment with the work) blended surprisingly well with the chant, performatively there was a slight imbalance with the notably quieter choir.

In the times of question and answer, Sir James explored whether the seat for sacred music was properly the church, or nowadays the concert hall. We were reminded how many of the most well-known composers were not only spiritual, but actually deeply religious. MacMillan also talked about the imperative for composers to hear in their hearts, as well as their heads, the music they proceeded to write; and how the text itself so often determines the music composed – hence his own frequent rhythmic shifts in the Canticle of Zechariah.

After the Interval, a number of items were performed corresponding to the progression of the Mass.  Sir James discussed how composing for the Liturgy required a different mindset – or rather ‘soul-set’ – than for an audience. Particularly in the case of well-known ancient texts (such as the ‘Ave Maris Stella’ and ‘Ave Maria’) so often set to music before, MacMillan explained the need to delve more deeply into one’s own personal imaginations and reflections, in order to bring something new. His interpretations of these two Marian items featured towards the end of the recital, and both were spine-tingling to hear.

The concert was held on the Feast of the Assumption, and the choice of music had clearly been carefully chosen to dovetail with this theme. Notably, that Feast is also the Cathedral’s dedication, and hence the day was also its Patronal Festival. The striking painting of Mary’s coronation, at the pinnacle of the chancel arch, further reminded us that every element of this performance – music, venue and day – had been so thoughtfully and carefully considered.

The performance finished at 9.25pm.