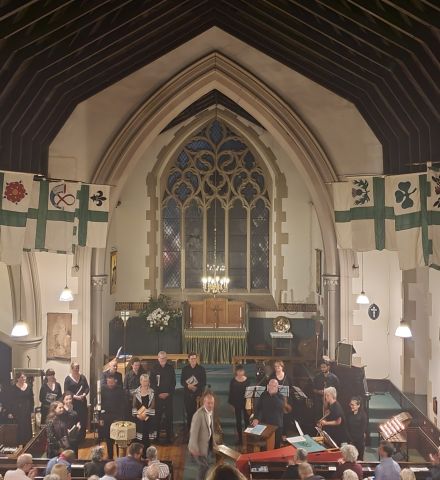 Two settings for the two different parts of tonight’s performance. In the first, we were transported to the reign of Charles II, at the time of the Restoration, and to the King’s desire that his Chapel Royal be filled be with the same florid music that he had experienced in France. The first of Purcell’s Verse Anthems that we heard, ‘O Sing unto the Lord’, a setting of Psalm 96, reflected the joy that the the text evoked, despite a demanding bass line. ‘Rejoice in the lord, Alway’, which followed, was probably the better balanced, particularly with regard to the organ accompaniment.

After the Interval, we moved to the major work of the recital, and were simultaneously transferred from the sacred to the secular: from the sphere of the church, to the world of the theatre. The performance of Dido & Aeneas was thoroughly engaging and a joy to experience. The first Act featured the Queen of Carthage reluctant to fall for Aeneas’ charms. All of the major parts were beautifully mastered – Libby Crabtree in particular being a brilliant Dido: the level of expression was captivating, and held us all enthralled.

As we progressed, we saw some lovely touches that set this interpretation of the work very much apart. As Director, Les Shankland showed an incredible amount of imagination and innovation in adapting the opera to this particular setting. A thundersheet was employed as an inspired dramatic touch, to communicate the stormy scene that is Act Two’s setting. Similarly, to create a sense of distance, some of the singers later sang from the Vestry; and towards the Act’s end, the Spirit which ‘appeared’ sang from the balcony. We have seen at Fringe events in previous years how Shankland uniquely arranges his recitals, and, together with his occasional interjections of humour and light-heartedness, he engages the audience in a wonderful way.

Act Three began with the Sailor singing his shanty, feigning an amusing Westcountry accent. By way of contrast, the sense of pain was palpable in the closing lament – the work’s culmination and climax; for all of this, the performers were rightly acclaimed with heartfelt applause.

The concert finished at 9.15pm.