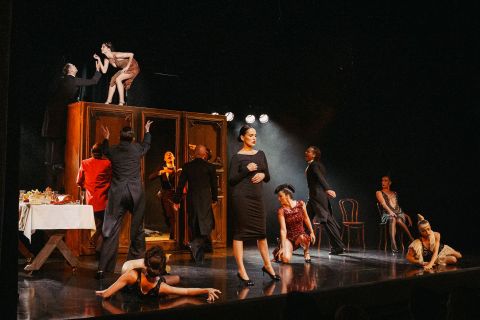 “This has shown us that the war, no matter how terrible and cruel, cannot deprive us of our dreams.” Olena Koliadenko.

Amidst regular air raid sirens, the Freedom Ballet of Ukraine was recently back on stage at the Molodyy Theatre, Kyiv and has now, against all the odds (the male performers received special permission to leave the country), travelled to present this spectacular show at the Festival Fringe.

This is the 20th anniversary of Freedom Ballet founded by the artistic director, Olena Koliadenko, whose mother was a choreographer which inspired her creation of an experimental style, a symbiosis between theatre and dance.

“This must be a simply enormous wardrobe!”  C.S. Lewis

The classic tale The Lion, The Witch and the Wardrobe is the epitome of mystery, wonder, and fantasy. Narnia… the land beyond the wardrobe door, a secret place frozen in eternal winter, a magical country waiting to be set free.

Centre stage stands a giant polished wooden wardrobe which plays a central role, with all the dancers all skipping inside or tumbling out of one of the three doors throughout the show -  an energetic troupe of weird and wonderful characters from the world of circus and pantomime.

It starts with a parade of smart waiters dressed in voluminous trousers and large pill box hats, carrying elaborate dishes for a banquet.  A gentleman in a red jacket, a kind of ringmaster, the master of ceremonies, is in command of a flowing sequence of dance routines. The musical score is a marvellous mash-up of smooth classical and jazzy rhythm.

First up is Bolero by Ravel, (written for a Spanish themed ballet) - like Torvill & Dean’s famous interpretation on ice, here the dancers glide gracefully in freeflowing waltzing style. There’s no balletic narrative as such but the music itself leads through a loose theme of love, loss and relationships.  To the soundtrack of Goran Bregovic - Tango (Bof Kudoz), a line up of couples, strutting out sleekly in provocative romantic encounters.

The dramatic ambience is akin to The Kit Kat Club in Cabaret, with the dancers in a fantastic array of costumes, from black tuxedos to vests and boxers, slinky, silky slips and glamorous sequined gowns. Every scene is an outstanding display of slick tempo and quick steps where each dancer expresses their own personality and theatrical character.  In one scene, a girl takes on the role of a Rag doll in an amusing pas de deux, her partner throwing her around like a stuffed toy, then pushes her inside the wardrobe where she sits curled up as the door slams shut.

A great deal of comedic entertainment and clowning around along the way and the amusing, typically outrageous lyrics of a quirky love song, Sick by The Tiger Lillies.

From the ridiculous to the sublime and the enchanting, Quarantine, Justin Hurwitz (from First Man movie) -  melodic piano with soft haunting murmuring vocals creating soulfully serene balletic music.  The composition is described as ‘An underrated masterpiece that will be remembered for years to come’.

To paraphrase this, Ballet Freedom is a magical masterpiece to be remembered for years to come.

Offering a gesture of solidarity as part of the Edinburgh International Festival, The Ukrainian Freedom Orchestra performed at the Usher Hall on Saturday 6 August.  It would have been fitting if the Freedom Ballet of Ukraine had also been invited by the EIF to celebrate the excellence, passion and professionalism of these dancers and  choreograhers. Perhaps in 2023?

From the opening procession of the hip thrusting waiters to the moving, flag waving finale, the audience was completely engrossed in the slick, sassy and scintillating theatrical dance show.