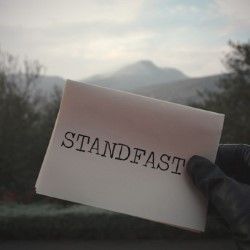 The year is 1918. You’ve been given a vital mission: identify and prevent a vicious German attack upon Edinburgh’s Old Town. Meet nurse Mary just down Lady Stair’s Close, receive your pack and head off to the next secret agent to receive further orders. Thrilling, inventive and utterly original, Standfast is a theatre/escape room hybrid set in and amongst Edinburgh’s picturesque Royal Mile.

The concept is ambitious, to say the least, but is faultless in its execution. An all-female cast decked in period costume lurk at their stations, hiding behind historic haunts for your arrival, communicating their secrets and tasks to you so convincingly that the story becomes alive as you dodge the flyerers, street performers and tourists in your WWI era treasure hunt to save the city.

Puzzles, intrigue and narrative playing an equal part, Standfast is a fun, roaming theatrical experience. This interactive and imaginative creation is unmissable and so completely Fringe.