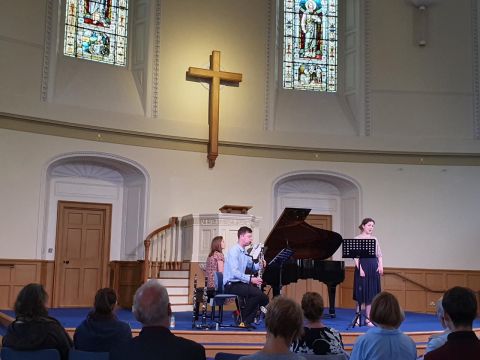 Although not formally part of the Fringe programme, this recital fell within the festival programme of events hosted at the beautiful Georgian church of St Andrew and St George.

There were two unfortunate issues associated with this recital, which it is probably best to deal with straightaway. The clarinettist suffered a nosebleed immediately before the performance began, and this regrettably recurred as the recital got underway. This necessitated a reordering of items in the programme; but was clearly an issue outside of anyone’s control, and didn’t require the recital to be halted.

The second problem concerned the length of the programme, which anyway overran by almost 15 minutes. Still, there was not enough time for the final two items, and I would imagine that this was an issue to do with experience in structuring, timing and balance – including the various introductions interwoven between the items. Information about one of the pieces, ‘Un Petit Psaultier’, occupied half the printed programme, whereas, given the wider emphasis placed on his 60th birthday celebrations at the Festival this year, the James MacMillan item (which attracted the loudest applause, and which Robertson performed exquisitely) got just a brief mention.

The supportive audience clearly felt a great deal for the performers, and, despite the evident stress of the occasion, they persevered and performed incredibly well, giving us some music of exceptional quality. It also spanned a number of styles and genres, and the opening three poems set to music by John McLeod, the ‘Animal Songs’, charmed the audience, with McLeod’s intentionally lighter touch bringing out the humour the poems contained.

Stuart Murray Mitchell’s ‘Horo’, was performed powerfully yet placidly, Carr evocatively conjuring up those vivid images of the Scottish landscape and seascape the work’s poems described. Michels came into her own with the performance of Ronals Center’s ‘Piano Sonata’, gliding seamlessly and effortlessly across the expanse of the music’s complexity, and fully and especially bringing out its rich and resonant bass.

Above all, it was the easy and organic synergy between the performers that really made the recital, and the understanding and desire to thoughtfully pair the most inspiring texts to the most exemplary music – this clearly shone through, and was a huge success. The performance finished at 1.45pm.