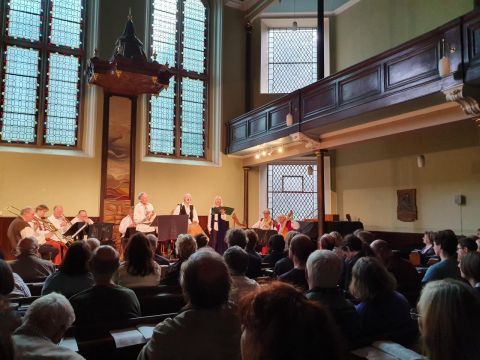 An interesting, stimulating and varied programme, with a wide selection of music from the Renaissance period.

The director spoke knowledgably and passionately about the various instruments, and the commentary interspersed between the musical items was amusing and engaging. Though the text (and translation, where appropriate) of the songs was helpfully provided, it was clear that it was the instruments themselves that were the main source of fascination for the audience, and that it was these they came to see.

When it came to the ‘Queen of Scots Pavan & Galliard’, the extended explanation and demonstration concerning the period sackbuts and cornetts, and how these were related to their modern successors, had us all enthralled. Similarly, before the two pieces dedicated to Sir William Keith – which were solidly performed – there was a sort of captivated curiosity, as we were educated in some detail about the racket (ancestor of the bassoon) and shawm (precursor of the oboe).

The playing of the instruments was often more tentative than it was confident, and the glances between the musicians at the more testing points in the music gave us all a bit of a smile; the pieces generally finished more strongly than they began. But the enthusiasm and enjoyment of the performers was clear, and that they were open to some spontaneous alterations of the programme, gave the performance a warm, relaxed and endearing feel.

A fun, family-friendly and entertaining hour, the performance finished at 7.30pm.