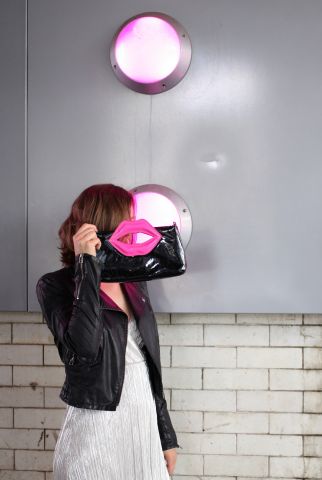 Fitch’s powerful opener was both energised and energising, in many ways a paradox: a manifesto of hope yet set in the midst of the apocalyptic. Their work, ‘Revelations’ took us to the uttermost extremities of the post-modern world and challenged the very values humankind had presupposed: “all gold is fool’s gold", “the drink that ends in thirst”. Throughout, the ‘poisoned, parched shrivelled earth’ is used as a metaphor for the human soul and spirit.

This is challenging stuff that made us ask questions. There is an intense echo and accompaniment given to Fitch’s voice – punk, pop and opera in one. Thus, as Fitch moved around the theatre, all the elements combine to paint a panoramic perspective of what may come beyond the end.

The second part of the show couldn’t be more different, falling within the storytelling genre. Polly uses something of her own story to imbue the act with added authenticity, but here the narrative concerns an intoxicated woman and her night-time escapade with a professional sportsman. This ‘last(?) one night stand story’, raises interesting questions about a sometimes desperate need for affirmation and the validation of ego. It was, however, hard to adjust to after the first part of the performance with its much more pedestrian pace.

Brian Felsen leads the climactic ritual. At the beginning of the evening, we had been given slips of paper, and some had been invited to wear a string cord round their wrist. The ceremony is intended to help unbind us from the ‘cords’ of previous attachments; the physical cords are cut on stage. At the same time, we are to be freed from the most painful emotion we found on the bit of paper – by tearing it out, and having it collected and discarded. The idea may have been to burn the bits of paper (which fire regs clearly wouldn’t permit), but the result of having the ‘feelings’ flung on the stage instead, maybe, wasn’t quite as liberating!

This part of the performance was certainly clever, if not cathartic; in fact, it showed real musical genius. Felsen is talented. He uses a looper device to create a complex multi-layered composition and he does this live. He entices you into its momentum and energy, and to that extent you are indeed caught up in something mesmerising and hypnotic. Like the two acts before, it does communicate a message about a need for healing, but the music itself was front and centre here.

The night’s line-up was actually different to the one advertised beforehand, and it is understood that one of the participants has since left the group entirely – the show being therefore changed again for the remainder of the Fringe. Nonetheless, this is a memorable and inspiring experience, and the performance lasted until 12:35am.