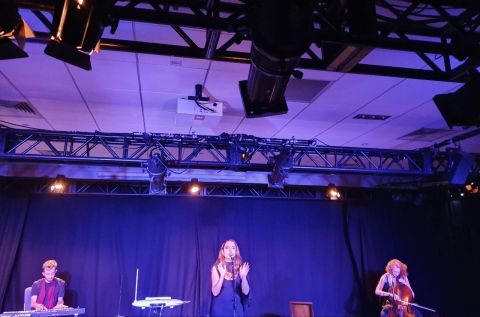 There was something special about this performance – an all-embracing energy that affects and stays with you.

From the beginning of the show and throughout, there is an enigmatic yet ethereal dimension to both the songs and the singing – haunting yet hypnotic. You keep pondering the performance long after you’ve left, and the music leaves you indelibly changed.

Grounded in a belief that we have not one but many lifetimes, each being but just one incarnation of the soul at the centre, the show eerily but soothingly invited us to immerse ourselves in the many-layeredness of life. Time and space cease to be linear – existence is multi-dimensional, and transcends the limitations we can seek to impose.

There are some elements of this performance that are kept deliberately minimalistic – the choreography and costume changes are sometimes slight, and the stage-setting seems perhaps a bit thin. But it is sufficient, and it works. The keyboard and cellist especially and beautifully complement the piercing purity of Monelise’s voice, that beguilingly draws you deeper into Hauntology’s magic and mystery.

A particularly striking feature of the performance is the inclusion of the theremin – not overly used as a gimmick, or with its sometimes eccentric connotations, but as an absolutely appropriate instrument that helps further the timeless and otherworldly feel.

The final song, “We’ll meet again”, is hard to forget and seems such a fitting climax, speaking as it does of a thousand lifetimes lived. Its echoing effect almost acts as a repeating refrain across the generations. Powerful, evocative and transportative: the performance finished at 12.25pm.