For Only An Hour, Dance Base, Review 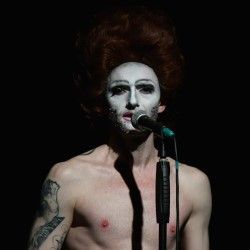 Last year at the Fringe I photographed Phil Sanger's performance of this show, and, this year, I am reviewing it because there is something very real, honest and touching about this piece of work which has drawn me back to watch it again. Mr Sanger describes his life with dialogue, dance and a touching warmth and sincerity which was also present in last year's performance.

This show has the ability to confront the audience without becoming threatening; the audience is quickly wrapped up in stories and experiences that the dancer has encountered in his life, pushing the reach of dancing away from just the physical by encompassing significant dialogue all of which is delivered in a powerful and effective way.

It's a sparse stage, and the virtually blank format contrasts strongly with the fine sequinned, bejewelled and diamanté beard Phil Sanger sports, I have never seen it's like before. Sanger's appearance throughout the show roams somewhere between the triumvirate of Dame Barbara Cartland, Fanny Cradock (on smack) and Phil Mitchel from EastEnders. It's extraordinary, arresting, funny and also, when the need arises, very touching.

There's a good and varied range of music which acts as a touchstone for many of the dance pieces. The tracks underscore and act as a counterpoint to the experiences the dancer has described for us. There is also some quite funny miming.

The LGBTQ+ community is well served by this piece as it clearly illustrates (without whining) the immense barriers and discriminations these communities face while still managing to be funny and to bring a smile to the lips. An exceptional piece of dance which is well worth seeing this year on the Fringe.