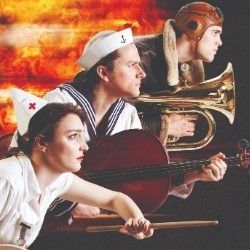 Returning to Edinburgh for the first time since their sell out run in 2011, Pants on Fire presents their award winning Ovid’s Metamorphoses. This actor-musician take on the original poetic chronicles by Roman poet Ovid, breathes life and humour into a story as old as time.

Depicted in a World War II setting, complete with Anderson Sister chorus, record player and air raid sirens, this retelling turns poetry to song and farce. Peter Bramley’s innovative production begins at the creation of the world, we travel through myths and time in an episodic fashion meeting a plethora of characters along the way. Cupid, now seen as an evacuee puppet with an anger problem. Jupiter, a cheating sleeze-ball and his vengeful wife Juno, as well as Hollywood heart-throb Narcissus who cannot stop watching his own movies.

Lucy Egger’s original score feels as if it was saved from a record store bombed in the Blitz, perfectly handled by the musical direction of Sam Ebenezer and Brandon Plummer.

The ensemble cast are god-like in their execution of this complex production. Seamlessly slipping from myth to myth and instrument to character barely without breath. Each and every performer is essential to both the telling of this tale and the exceptional standard of performance on show, but the female performers really prove that They Can Do It.

A first-class production that, given the current political and economic climate we’ve found our world in, it could not be more timely.