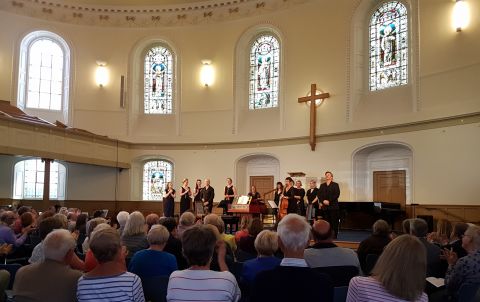 Before the main piece, the programme was introduced by Mozart’s Laudate Dominum, followed by the Sub Tuum Praesidium. The second of these two in particular was especially significant, in providing an apposite prelude to the substantive work that followed. Although separated by centuries, this prayer for intercession to the Blessed Virgin made the opening to the Stabat Mater even more solemn and sombre than is usual, and the juxtaposition worked wonderfully well.

The sense of purposeful movement and momentum was compelling and haunting throughout the performance, the richness of the voices holding the kaleidoscope of emotions together in the tension of both their diversity and unity. Some members of the audience did, however, feel that the the lack of a text in the programme, and an English translation, made it a little difficult for them to position themselves within the work, but the polished performances of the soloists conveyed with authentic grittiness the meaning of the hymn beautifully. There was a brilliant balance between the ensemble and the sopranos – the conclusion of the Quis est homo and the Vidit suum dulcem natum was notably spine-tingling, evoking an impending sense of jeopardy. The Eja Mater and following sections then brought us back to the themes of the preceding work, as the narrative gave way to prayer, and brought out a captivating sense of the contemplative in the midst of the anguish and reality of grief and human heartache. This well attended performance was clearly much appreciated by the many who came. The performance finished at 1.20pm.