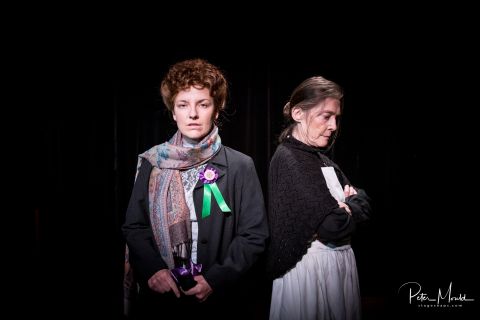 Kent based theatre company Clair/Obscur, an anglicised version of Italian chiaroscuro that describes the effect of light and shade in art, have more than lived up to its name with their production of A Necessary Woman.

On Census night 1911, Emily Davison hides in a cleaning cupboard the Palace of Westminster. It is from here that she plans to make her audacious entry to the House of Commons to make a speech she has prepared. While her speech was never actually delivered, this play gives us the privilege of hearing it more than 100 years on.

Written and performed by Deborah Clair as Suffragette Emily and Philippa Urquhart as Mary, a servant of James Lowther speaker of House of Commons, these accomplished actors show the sorority that developed between two women who inhabited spheres as separate as those between men and women of the time. While one is keeping alive the flames of revolt, the other one is keeping alive the flames in the grate of her master.

The idealistic Emily prays to another strong and driven woman in a man’s world, the martyred St Joan of Arc, and is pitted against the reality of the working woman Mary. Each woman has experienced hardship. One in the form of prison and force feeding; the other barefoot poverty and the shame at the time of an illegitimate baby, yet each is 'a necessary woman'.

Deborah Clair give a nuanced performance showing a determined woman who feels ‘fulfilled and blessed’ in her mission but Philippa Urquhart’s long experience on stage and screen utterly shines in her portrayal of Mary this absorbing piece. Dominique Gerrard’s direction is admirable in such a small space as this Fringe venue though the sightlines are poor at the start when Emily is lying down in her cupboard.

Emily Davison hoped for “…a time when women will no longer be constrained…” yet 100 years on, the audience on the play’s opening day at this year’s Fringe held women from various parts of Scotland campaigning for their pensions as part of #Back to 60. The fight goes on.