A Midsummer Night's Droll, theSpace on the Mile, Review 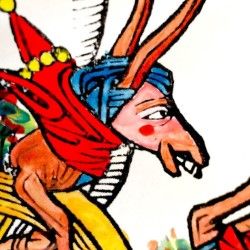 In 1642, Oliver Cromwell’s puritan regime closed the theatres and made acting illegal. Celebrity actors sought work in Europe. Others went back to their day jobs as skilled tradesmen. The remainder, with neither great acting skills nor a trade, formed an illegal underground, with performances of “drolls” – farcical, rough-and-ready playlets delivered and enjoyed with wild abandon.

the Owle Schreame’s A Midsummer Night’s Droll is one rare example of this forgotten and largely lost body of work. "The Merry Conceited Humours of Bottom the Weaver", loosely based on Shakespeare’s original, has not been performed for 350 years.

Any group of players stepping out with a Shakespeare pastiche – whatever its origins - are walking on pretty well-trodden boards, it must be said; it is a fairly tall order to come up with a fresh and original take on a plot and set of characters that have already been hammed up on countless previous occasions.

The original drolls would have mostly been performed in the back rooms of alehouses late at night when the amount of drink taken by performers and audience alike would have greatly contributed to the merriment of the occasion. Recreating something of that noisy, raucous and good-natured atmosphere at ten o’clock in the morning in Edinburgh is quite a challenge. For the last week of this year’s run, the performances are at nine fifteen at night, a much more fitting time of day for this kind of jollity.

These comments aside, the audience and performers, fortified, presumably, by nothing stronger than a couple of stiff lattes, all started their day with a hugely funny and entertaining show. Brice Stafford led the line of with his trademark performance of the pompous, posturing buffoon, with great support from the other rude mechanicals in silly low-budget costumes and home-made masks befitting a droll. Of particular merit were the three fairies, Cobweb, Peaseblossom and Mustardseed – stick puppets crafted from dried gourds – which managed to be both cute and really rather spooky at the same time.

At the end of the day – or even at the start of it – the raw energy of the actors and the sheer pace of the performance, which rattles over the occasional missed cue or fluffed line, make for a very engaging and oddly uplifting show. It is a useful reminder that British silliness has a very long and disreputable history.