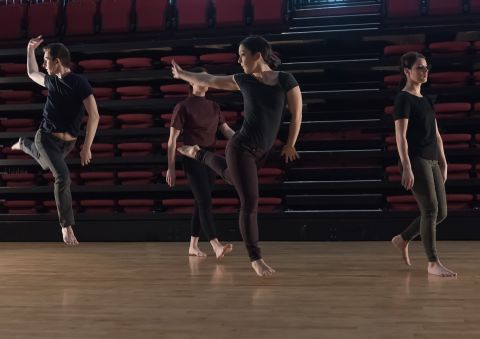 The term ‘Virago’ is an insulting word to describe an improper woman, a woman with male qualities such as defiance or too much fight in her. This would seem an appropriate word to describe Minnie McGuire, the most arrested woman in Victorian Wales, if only we were given a little more information.

Minnie McGuire was a descendant of Irish immigrants who fled to Wales to escape the potato famine that ripped through Ireland in the 1840s. Fifty years later, in the poverty stricken streets of Cardiff, Minnie McGuire would be arrested over a hundred times for lewd behaviour, prostitution and alcoholism.

Ffin Dance Company’s production does not tell this story. One can only assume that instead of a narrative, they aim to showcase aspects of Minnie’s sordid life as they dance with bottles, presumably as a nod to her dependence on alcohol, and perform one drunken sequence, but even that is only one aspect.

A rather unstable looking gallows frame leans in one corner of the stage, hanging bottles from nooses; an interesting image that is left unanswered as they fail to specify whether she was hanged for her crimes or not.

McGuire’s story is not a well-known one. Almost certainly the majority of the audience won’t know anything about her going into this performance – sadly they will leave knowing just as little. The first 80% of the piece focuses on the Irish potato famine with very loud and jarring pre-recorded narration telling us first facts, then an account of what Ireland became. At one point I did ask myself ‘have I walked into the wrong show?’ as potatoes tumbled round the stage and the abrupt voice tells us how millions of Irishmen died…I thought this was about Minnie McGuire.

Wait up, she is mentioned – in the last song. A lovely song, from Welsh songwriter Lorraine King. Apart from this, there is no mention of Minnie, no structure and no sense an audience can follow, with a focus on the wrong topic, and a very abrupt ending.