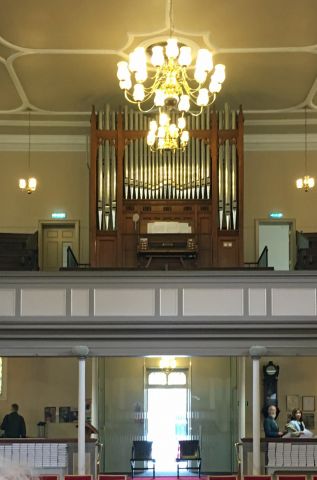 With the many of the audience sitting on the dais facing the organ, the concert was introduced by Marion Lees McPherson, Director of Music at Stockbridge church for many years. Before long she had climbed to the organ loft to be the page turner for Nancy Crook.

Nancy Crook is a well established and respected church organist who is presently at St Leonard's, Dunfermline. In two week's time it will be Marion's concert. The organ at Stockbridge Church was built in 1883 by August Gern of London, one of many he built throughout his career.

The first half of the programme for this lunchtime concert included music written which will have been familiar to the organ builder. A Toccata and Fugue was followed by a Choral Prelude both by the Danish born Dietrich Buxtehude. Buxtehude's idol is said to have been J. S Bach whose Fugue on the Magnificat 'My Soul Magnifies the Lord' followed.

Mendelssohn's Sonata 'Our Father, Which Art in Heaven' was perhaps the major work of the concert, after which the organist was pleased to take our applause. There followed more modern composers, Gigout, Vierne, Yon and from Walton arranged by Gower Popular Song from Façade 1996. All these were building us up to the fun of Rawsthorne's Hornpipe Humoresque.

If there was a problem it was with the additional noises from the organ's mechanics for the Buxetehude's Choral Prelude. But that forgotten, it was a great 55 minutes of organ playing.