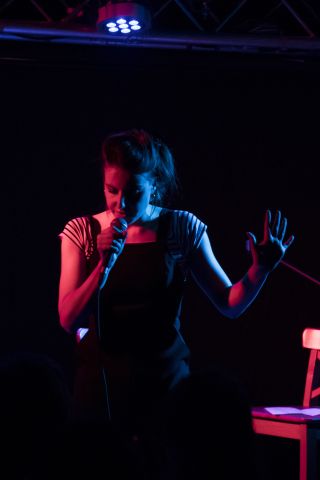 This new show, “Elsa" is based on the Open Mic format, where amateurs and professionals can try out songs, stand up comedy or read poetry at a coffee house, bar or pub.

Dressed in a striped Breton T-shirt and dungarees, Isobel sits on a stool with her guitar and, (without a welcome hello or introduction), launches into an imaginative yet realistic musical tale of the life and loves of Millennials, “what will I become when I stop having fun?” she ponders, concerned about the future, work, career, creating an alter ego, somebody else… Elsa. As a wannabe actress, working as a waitress in a café, she tries to liven up her tedious work by eavesdropping on conversations and girly gossip, translated into a series of comic songs:

“Have you seen Ben lately? I saw him on Saturday, oh cool, isn’t he so lovely, yeah, he’s a great mate, oh Ben… Ok, back off, he’s mine!” And the chit chat flows along about dating on Tinder, yummy mummies, children’s schools, vegan diet, pilates. The song is essentially a poem with quirky rhymes set to the rhythmic strumming of chords with a steady beat behind rather monotonous, fast paced lyrics.

Reminiscent of the vocal style of Dory Previn, KT Tunstall, Katie Melua & Laura Marling, Isobel presents her own individual image of a female singer + acoustic guitar + narrative songs, “a girl with a guitar searching for a sense of self.” With a jazz-folk musicality, the theme focuses on femininity, relationships, desires and dreams through humorous storytelling, in which we “meet” a cast of characters, Nina, Miranda, Lillian and Grace.

Quietly observing the guys, gals and romantic couples, is the invisible Elsa, clearing tables, serving skinny lattes, lost in her own fantasy world with literary allusions to Shakespeare and Chekhov. However, with her often high pitched tone of voice and speedy delivery, it is sometimes difficult to hear the words clearly and therefore follow the plot.

With more of a melodic tone and soulful emotion is “ Grace will never grow old” which immediately brought to mind the baroque pop power of “Eleanor Rigby” by Lennon-McCartney. And the comedic song “ I need a lover/photographer” relates how “Elsa was feeling kinda stressed, her online presence was not at its best” - if she had a boyfriend who could take images of her, she would stop being self obsessed with selfies.

In the middle of her act, Isobel slips off her stool to present an energetic Rap number with tentative dance steps. Experimenting with performance styles is admirable, but this was a serious mistake, leaving her comfort zone completely with a sudden lack of confidence.

The Baillie Room at the Assembly Hall with its narrow rows of conventional theatre seats does not seem to be the best venue for this show. It would have been perfect if performed actually in a branch of Starbucks or Costa, a Cocktail Bar or Pub, to give an authentic Cabaret atmosphere, the audience sitting around with a cappuccino or glass of Prosecco.

This premiere show feels like a 40 minute work in progress, in which we were served a lukewarm, weak Flat White instead of an anticipated hot, strong espresso.

Isobel Rogers is a singer/songwriter and actress, writing for radio and theatre: With its dramatic, truthful narrative, "Elsa" could be developed fully into a musical comedy, bringing the characters to life like a modern day version of "Friends" at Central Perk.