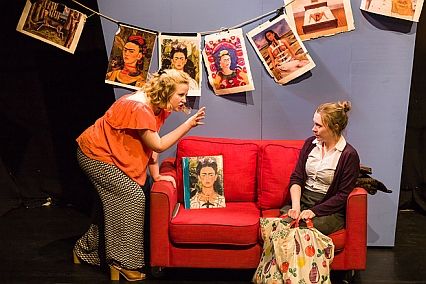 Once upon a time there was a woman who was too scared to live. Meet Zoe, a timid, innocent bookworm who has been pushed off the top board in working for green-eyed, floppy-haired publisher, Gavin.

Just as she is mustering courage to take the plunge of inviting him to see an epic Croatian play she meets her nemesis in the form of Ruth, a former acquaintance, now West End ticket seller and self appointed authority on all things theatrical. And theatrical she is, raging against the patriarchal system that keeps her off the stage, for surely with her talent there can be no other reason. “I am a woman, where are my parts ?” she flounces.

Trailing domestic disaster and broken relationships behind her she takes up residence on Zoe’s sofa and hatches plans for a one woman play. Needing a feminist icon as a subject she rejects Sylvia Plath (”always good for a laugh”) and settles on Zoe’s suggestion of Mexican painter, Frida Khalo, despite knowing nothing about her. With the reluctant help of Zoe, a two-women one-woman play is born in the form of “My Womb is a Paintbrush”.

Dodgy sets, accents and a grasp of history allow us to see the life of Frida in flashback. Ruth plays Frida with her singular acting style and character interpenetration, coloured by her own narcissism. As the plot descends into monobrowed madness and a Communist Party party of mojitos and Marxism, Zoe is pushed once more out of her depth. But this may provide the wake-up call she needs. Can the bookworm turn ?

While there nothing new in the odd-couple approach or a performance about the perils of staging a play, this production manages to take swipes at the pretensions of both the art and theatre worlds and still play it for laughs.

The performances and slick and spirited. Chris Larner has a talent for memorable one-liners (“But you promised to take me up the Amazon” from The Translucent Frogs of Quuup is submitted in evidence) and the script doesn’t fail to hit the mark here.

The result is somewhat like a Hugh Grant film filtered through tequila - which is probably the best way to see one.