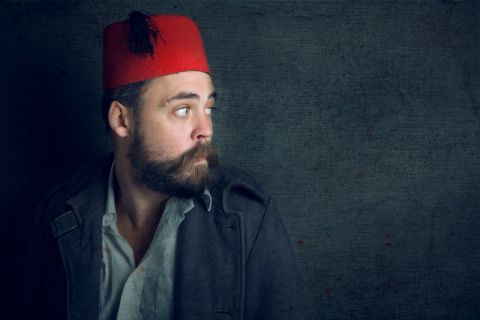 One actor, one suitcase, one hour. Henry Maynard takes on quite a challenge in Flabbergast Theatre’s ‘Tatterdemalion’. For a reviewer more used to relating ‘the blethers’, as a set-designing friend describes text-driven theatre, the physical stuff can sometimes be a challenge.

Maynard’s appearance may or may not be (in part) an homage to England’s great clown, Tommy Cooper, but there are certainly Cooperesque moments in this melange of mime, clowning, physical theatre and audience engagement.

Wordlessly (almost) Maynard takes us on a voyage of uncertain destination, involving the minimum of props and the maximum of action. Seemingly caught in the spotlight without a necessary adjunct to his performance, he produces a rope and persuades the audience to help drag the recalcitrant individual/animal/object onstage.

This is but the beginning of a series of mime games played brilliantly and with complete aplomb, culminating in a satirical rail journey involving almost the entire audience and a gigantic fold-out newspaper.

Although audience participation is very much under Maynard’s direction, ‘Tatterdemalion’ (defined by the Oxford Dictionary as a ‘ragged person’) feels very much in the tradition, if it may be so described, of ‘theatre sports’, where quick-witted improvisation and response are always called for. Although clearly the outcome of a great deal of purposeful development work, none of the result feels forced or false, and the audience response to the performance seen clearly reflected this.

It’s the fate of those appearing on the Fringe that reviewers may stumble upon and into their work without the appropriate critical apparatus to fully communicate the nature and purpose of what performers are seeking to achieve, but that, of course, may be true of audiences in general also, and it’s to Maynard and Flabbergast’s credit that this is never a problem.

Thanks here to Holli Dillon, who, in the course of an email conversation on another matter, first alerted this reviewer to ‘Tatterdemalion’.