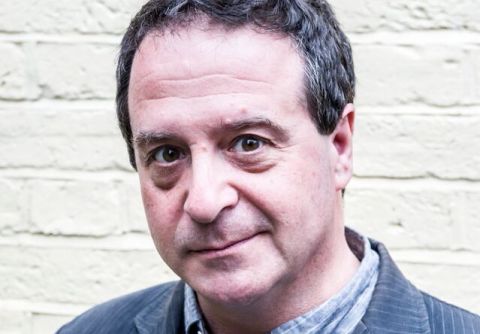 ‘Mark Thomas is on the loose again!’ One can almost hear the screams of panic echoing around Canary Wharf – well, perhaps not, but even if the silence remains pin-drop dead, Thomas is undeterred. He is, as ever, a man with a mission to shake us out of our acquiescence to ‘things as they are’.

In this case, it’s our acceptance of the privatisation of formerly public space. ‘Trespass’ is the title of Thomas’ latest show, which he explains is a ‘work in progress’, a particularly apt description as it concerns the gentle art of walking – or as those who patrol the spaces formerly known as ‘the public realm’ would have it ‘loitering’.

In the days of this reviewer’s youth, ‘loitering’ was something done by old men in dirty raincoats who smelled of meths, but now, all of us, it seems, can participate. Except, of course, we can’t. Hard-pressed local authorities, their powers diminished, are now less able to defend public rights of way and public spaces from those who, as Thomas neatly puts it, use phrases such as ‘no loitering’ in place of ‘get orf my land!’ – in spite of their own tenuous claims to tenure.

In order to demonstrate how this phenomenon is spreading, Thomas takes us on three walks through his native London, beginning with Clapham Common and ending near Buckingham Palace.

Each is distinct, and each involves, unsurprisingly for Thomas, a carnivalesque form of protest designed to anarchically (the term is used advisedly) satirise authority. It would be something of a ‘spoiler’ to detail each of them here, but fair to state that cake and chalk are involved.

Thomas is never less than a joyous celebrant of our contradictory recalcitrance in the face of homogeneity and commodification.

Invoking the memory of the Kinder Scout mass trespass, in which some four hundred mostly young unemployed ramblers action led ultimately to the passage of ‘right to roam’ legislation. Whether Thomas’ random acts of urban exploration will lead others to follow suit and perhaps in some way alter the current course of creeping erosion of public spaces remains to be seen, but one suspects there will be many, not only in London, viewing this with similar concern.