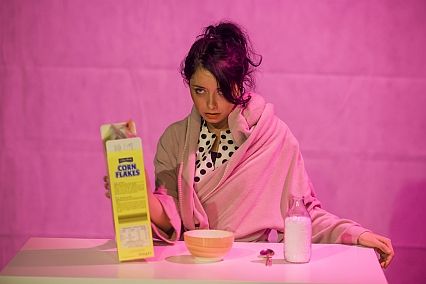 Welcome to “This is Your Mind”, an avant-garde game show that attempts to get into the heads of a boy a girl and a “mad” mother.

Our hosts are Terry and his breathy-voiced assistant (co-host she interjects), ex-wife, Fizz. They start by apologising to those adversely affected by last week’s show. This doesn’t bode well for new contestants, friends Jude and Leon.

Terry questions them on their background, family and life, trying to find out what makes them tick. On the face of it Jude is unemployed and Leon is a magician, no he really is, as in has actual mystical powers.

Leon has met Jude when she worked as a ticket collector, the last in her train of fairly dead-end jobs including bartender and burger-flipper. Along with card tricks Leon demonstrates his more significant power - he can make people disappear.

When Jude starts to see playing cards everywhere she thinks that she is going mad. Her troubles run deeper than prestidigitation however as her mother suffers from mental health issues that have seen a manic episode disrupt a family wedding.

Leon too has a difficult family background, hiding a childhood of abuse at the hands of his father, who has disappeared. They have both found ways to escape inside their heads. He assigning his problems to his deck before discarding them and she joining the beautiful people in an imagined 1960’s Paris. Reality is less colourful, dull with no suspense, a world where it is difficult to care what happens next.

The stories are told throughout the game show, in sometimes confessional interludes and at others mad-cap dance routines, antics and re-enactments. It seems as if the show is sponsored by drug companies, handing out pills as if sweets and promoting unlikely cures. Things are getting weird. The crooning Frankie Valium makes what looks like a guest appearance from a David Lynch film as he sings about loneliness and discusses the merits of a Freudian talking cure. Our hosts insist that they are wise, experienced memory shepherds trying to get these recollections in order, helping people remember properly.

When Jude gets a call from her father at the hospital she panics and might need to put her reliance on Leon - as long as he hasn’t been tricking her all along.

The production is a colourful, surreal and inventive look at how we regard and treat mental illness that additionally extends to thoughts on family, friendship and perception. There is perhaps a little more than the game structure narrative can hold and the final message is a bit mixed. The blinding light moment where it all resolves doesn’t really come about.