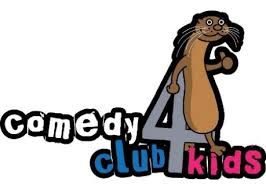 Having delivered funny stuff for 6-plus’s to laugh at for nearly a decade at the Fringe, Comedy Club 4 Kids is now a well-established, must-see item on most children’s Festival wish-list. In adult land, the Edinburgh Fringe and comedy has long been synonymous and so it seems only fitting that a first experience of stand-up should take place at the Woodstock, the Holy Grail of comedic performance.

On entering the venue, with ‘School’s Out for Summer’ blaring away, it’s amusing to see children clambering to fill the front rows - adults will rarely voluntarily put themselves in the firing-line and are known for requiring a little lubrication to get them in the mood. But kids are different, they are always in the mood (or in a mood); they don’t need to be drunk to lose their inhibitions - they have yet to acquire any - and being the centre of someone else’s attention is most kids’ raison d’êtres.

It was all the more hilarious then, that compere Luisa Omeilan plucked three of the most reticent and underwhelmed young people to join her on stage to help her form a girl band during the initial warm-up. The first was a girl aged 8 with a malevolent glare who was neither amused nor excited by anything. Omeilan, unfazed, used this to her advantage, dangling her upside down in the air and throwing her about with pretend equal disdain.

Luke Benson, the first comedy act, was not so child-savvy and having unwittingly made the mistake of inviting Evil Emily into his act, he struggled to come out on top. However, failing to raise a smile from the somewhat peculiar child representatives on the stage made it all the funnier for those off it, so it’s probably fair to say this bout ended in a draw.

After a bravely confident short set from 13 year old budding comedian Harry Noel, it was Howard Read’s turn. With two comedy shows for children running at this year’s Fringe and a clutch of awards already under his belt, Read ended the show on a riotous high note with his Children’s Revolution Song and Lullaby-To-Keep-Kids-In-Bed-At-Night.

The line-up for this show changes continually and there is an interesting mix of performers who specialise in children’s comedy and those who are currently performing on the adult circuit getting their first experience of stand-up for children. Great to see adults and children planting their comedy roots together in such hallowed ground.