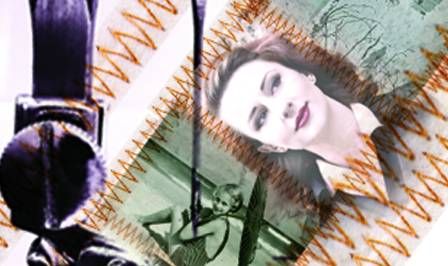 Assembly has  a venue this year at St Mark’s Unitarian Church Hall, a hidden wee spot that is actually just across from The Traverse but is accessed through a close and down a wee, narrow lane that is  a bit rough underfoot but with some greenery.

It feels a bit like going to a secret location to take part in some esoteric ritual.  And that’s not so far from the truth as the small hall has become the venue for the annual Burntisland Beetle Drive.

We are greeted by the brilliantined and eager to please William (Stephen Docherty), and led to low seats that are set along the walls behind tables decorated with old paper sewing patterns that set the tone for the theme of threads and the very feminine sewing and knitting metaphors that are the play’s motifs.

Amid the mild argy bargy between husband and wife Izzy (Mary Gapinski) and William who are respectively 78 and 80 but looking like their lovely younger selves in the 1950s, the audience is guided through the mysteries of the Beetle Drive, playing a real game with dice in plastic cups with a real prize at the end!

This gentle, innocent and sensitively written piece unpicks the lives of the three characters that have intertwined since childhood. Using individual narration delivered with believable natural Scottish speech by each actor to give their perspective, writer Jules Horne takes us through the warp and weft of the past and present of Joan (Claire Dargo), Izzy and William where choices are made between pushing a pram or typing in London; between spending a life with one close friend or another.

This modest and intimate performance, full of satin dresses, paper nylon underskirts, dookers (swimsuits) with modesty panels beautiful bunting and the delightful prop of an old sewing table, is so close that both audience and actors are exposed.

Nutshell’s mission statement “to champion female theatre practitioners in Scotland” is ideologically spot on and while the play is feminine it is in no way anti-men.

However, the stated running time of 75 minutes was cut to 60 minutes and made the ending feel flawed, like a hem that had been hastily taken up, leaving a feeling of confusion and slight dissatisfaction which is a pity after such an engaging and evocative performance.