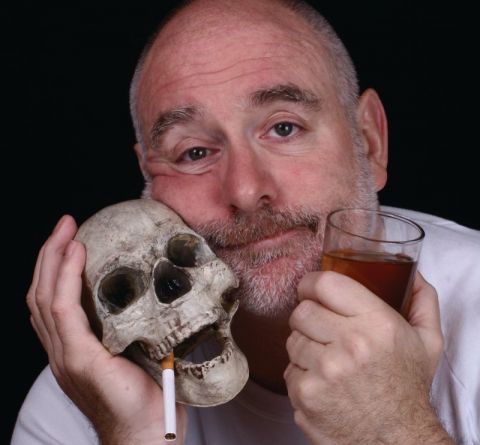 The idea of over two thousand shows is a daunting one for any prospective Fringe goer. The very phrase ‘fringe theatre’ can bring fear into the heart of even the most experienced reviewer. Yet sometimes you’ll come across a piece of performance art that truly makes you see things in a different light.

Guy Masterson’s The Half seems to be a simple take on an ageing actor’s experience of emotions pre-performance, but it is really so much more. Set thirty minutes before the lead goes on stage, we see him go through the motions of pre-show traditions. Water: check. Script: check. Shoes: check. Trousers: no check!

Herein lies the humour of The Half. There is something very believable about the situations Masterson conveys. As things progress, we learn it’s the first real performance the actor has given in 15 years and he has unwisely chosen to do a solo rendition of Hamlet. The unabridged version.

As the realisation of what he’s doing dawns, so too does a plethora of emotional turbulence he never even knew existed. A bitter-sweet relationship with his ex-wife is the tip of the iceberg as the actor appears to go into a full blown nervous meltdown before our eyes.

Masterson’s performance manages the balance of humour, depression and anger just right. It never dwells for too long on the more sombre moments, keeping the show’s tightrope script from tumbling. A good thing for a 65-minute one-man show.

Written by Richard Dormer, directed by David Calvitto and performed by Guy Masterson, The Half comes across as a collaborative effort of experiences shared by all involved. It is a heart-felt salute to anyone who has undergone trial-by-fire and has come out still just a little confused.

Catch The Half at Assembly George Square now!