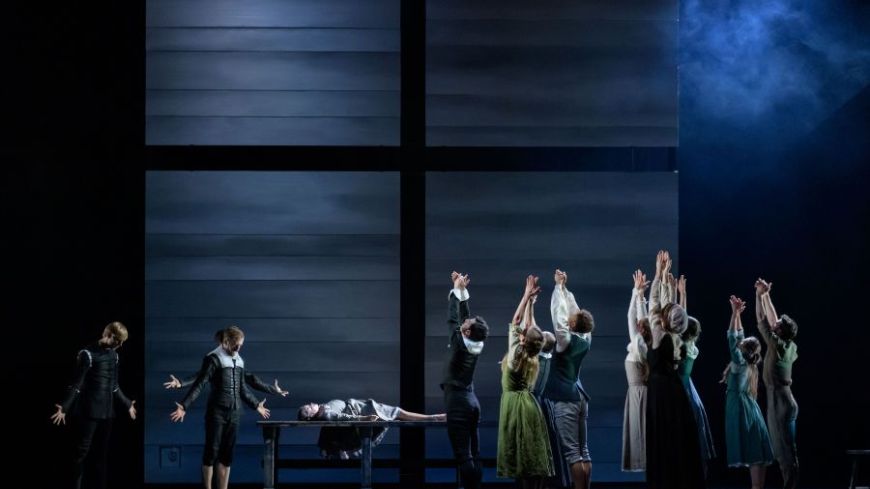 “I look for John Proctor that took me from my sleep and put knowledge in my heart. You loved me, John Proctor, and whatever sin it is, you love me yet!

In Act 1 of The Crucible, Abigail alludes to her past relationship with Proctor, who is now desperately trying to put the incident behind him. While the brief affair between John and Abigail, a servant in his household, is not dramatised in the play, this is a crucial starting point as a back story, in the adaptation for this narrative ballet.

Written in 1953, Arthur Miller used the Salem witch-hunt of 1692, when the Puritan community confront mass persecution of the innocent, as a parable of McCarthyism, the anti-communist House of Un-American Activities Hearings.

Choreographer Helen Pickett has taken the essential themes of the play, the rebellious pursuit of human desire in contrast to the fear of evil of the religious doctrine in the rigid theocratic society of Salem. The claustrophobic atmosphere of this tight knit town is quickly captured through the sonorous sound of bells, soft lighting casts shifting shadows on the sign of the Cross.

As a free spirited teenager, Abigail uses her seductive charm to form a dangerous liaison with John Proctor. Their pas de deux expresses the tenderness and exuberant passion of their illicit adultery, beautifully echoed in the music to reflect the eloquence of embrace.

Appearing as the innocent victim, Abigail becomes the vindictive antagonist in this love triangle, with John caught in the middle between her and his wife Elizabeth, who is humiliated when she learns the truth of his sinful behaviour.

Abigail’s refusal to believe that their affair is over and her desire for revenge, drive the action of the story.  In the darkness of the forest, Abigail, Tituba, Betty and friends join together in a Pagan tribal dance to invoke the spirits with uninhibited abandon to the point of hysteria, with the ritualistic score driving the momentum of this hypnotic, 17th century Rave. When rumours of witchcraft spread, the congregation gathers together, kneeling, praying, wailing in despair, their arms stretched up to the heavens to exorcise the devil.

The self-righteous church leaders and pious people generate a fearful frenzy of gossip, lies, distrust and vindictive accusations. The stark setting and sombre costumes illustrate this insular community, the Puritan uniformity of white collared black gowns of the ministers and court officials, and the repressed women in plain dresses and bonnets.

Peter Salem is renowned for his soundtracks for TV drama (Call the Midwife, Cider with Rosie), theatre and ballet, most significantly, “A Streetcar Named Desire” for Scottish Ballet.  This score perfectly integrates every step of the movement from slow, poignant melody and country dance jigs to an electrifying beat to evoke the shifting mood and dramatic tension.

As an indictment of religious fundamentalism, this vivid re-imagining of “The Crucible” is a timely reflection on the growing intolerance spreading through world politics, society, personal values and faith.

Without Miller’s text, the narrative is clearly related through Pickett’s sensual, richly emotional language of choreography in this wild, whirlwind of a performance, showing off the synchronised precision and dynamic energy of the vivacious Scottish Ballet ensemble.